The Pennsylvania Legal Aid Network, Inc. and its affiliate programs have been providing vital civil legal services to low income Pennsylvanians since 1973, when state funding for legal services first began. During this time, the names of programs, including our own name, have changed or been added, but the core services have remained the same.

When Governor Milton J. Shapp and the General Assembly first decided to fund civil legal services, they decided to do so through funding to the Department of Public Welfare, but they also agreed that there should be an intermediary umbrella organization that would be responsible for the accountability for the funding, by its contracting with the Department and with the subgrantee programs actually providing services. This brought about the creation of the Pennsylvania Legal Services Center in 1973.

Part of the reason for the vacillation of funding levels in the early years was that the statewide legal aid system was still starting up, and some programs were still being formed. In fact initially, some of these programs even provided representation in minor criminal cases. But they have not done so since the early 1970s.

In the formation stages, many of the legal services programs were single county programs, or at most, they covered several counties. Over the years, some of these programs began to merge into larger programs, creating more efficient administration and allowing for greater specialization of the staff of these programs in various areas of poverty law.

Initially, the Pennsylvania Legal Services Center (PLSC) provided not only the administrative oversight and accountability for funds and services, but “The Center” also housed some staff who actively participated in legislative and administrative advocacy and even in some direct cases.During the nineteen-eighties, under some political pressure, The Center consolidated its operations, withdrawing from various forms of direct client advocacy.

Since then, the core functions have been the administrative accountability for funding, including monitoring and other contract compliance activities with the programs; providing of regular, generally annual statewide training conferences; providing legal resource materials for legal services staff; administration of the Martin Luther King, Jr. Internship and Fellowship Programs; housing and maintenance of the PALawHELP.org and PAProbono.net websites; and the provision of other helpful resources to the programs.

The federal Legal Services Corporation also funded an entity in Pennsylvania called the Law Coordination Center (LCC). This statewide entity was primarily involved in the provision of training for staff and clients, providing resource materials for use by attorneys and paralegals, and other types of support for the programs. It did not administer any funding for the programs.

Due to political changes in Washington, D.C., support for state support centers was eliminated by the Legal Services Corporation and in 1994, the LCC and the PLSC merged into a new entity called Pennsylvania Legal Services (PLS).

In the late 1990s, the Legal Services Corporation began to pressure states to consolidate and merge programs and to develop statewide legal services plans. Although LSC preferred a model of single statewide programs, in Pennsylvania the current model was adopted, consisting of six regions of the state, comprised of eight regional programs making up the Pennsylvania Legal Aid Network.

In 2006, PLS changed its name to its current name, the Pennsylvania Legal Aid Network, Inc. (PLAN, Inc.) and its affiliate programs are referred to as the PLAN.

Throughout its history, PLAN, Inc., by all its names, has been committed to advocating for the legal needs of low income Pennsylvanians. The network of programs has handled about 100,000 cases each year, sometimes exceeding this amount and sometimes representing fewer. But generally, the numbers have fallen within about 20% of this mid-range number.

PLAN member programs that provide core day to day services in every county of the state are displayed in the following map. This map also lists the six specialized programs, providing statewide backup and client services. 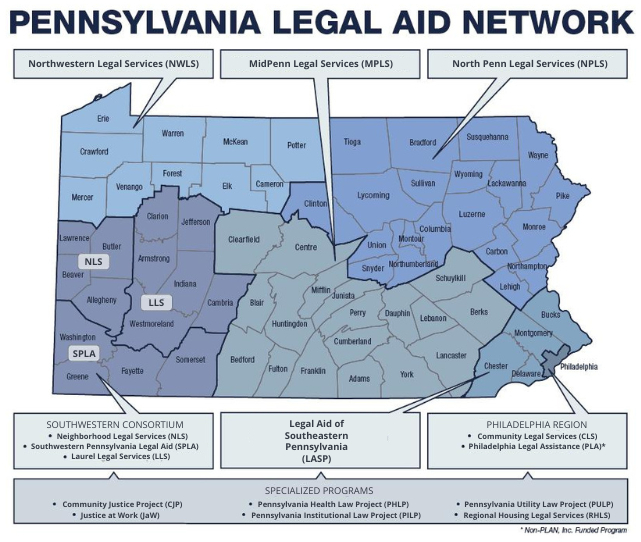 The discussion above contains information about the core funding for civil legal services, through the annual appropriation process of state government. There are two other vital sources of support, both administered by the Supreme Court’s Pa. IOLTA Board.

Interest on Lawyer Trust Accounts (IOLTA) funding is made up of interest generated on client funds held by attorneys. Because an attorney may not ethically earn interest for him or herself from client funds, in the past the banks holding these funds realized a windfall on interest earned. First by legislation and then by Court Rule, attorneys are now required to hold these funds in IOLTA accounts, when the amounts held are too small, or the length of time the funds are held is too short to justify arranging for a separate account. The interest generated is pooled statewide and is used to help fund legal services. The amount generated has ranged from about $2 million annually to well over $10 million, depending upon the interest rates.

In 2002, recognizing the relative underfunding of legal services, the General Assembly adopted Pennsylvania’s Access to Justice Act, under which a filing fee surcharge of $2 is assessed on various court filings and the revenue is used to help fund legal services. This surcharge now generates nearly $10 million annually. For a more information on Pennsylvania’s Access to Justice Act, please click here.