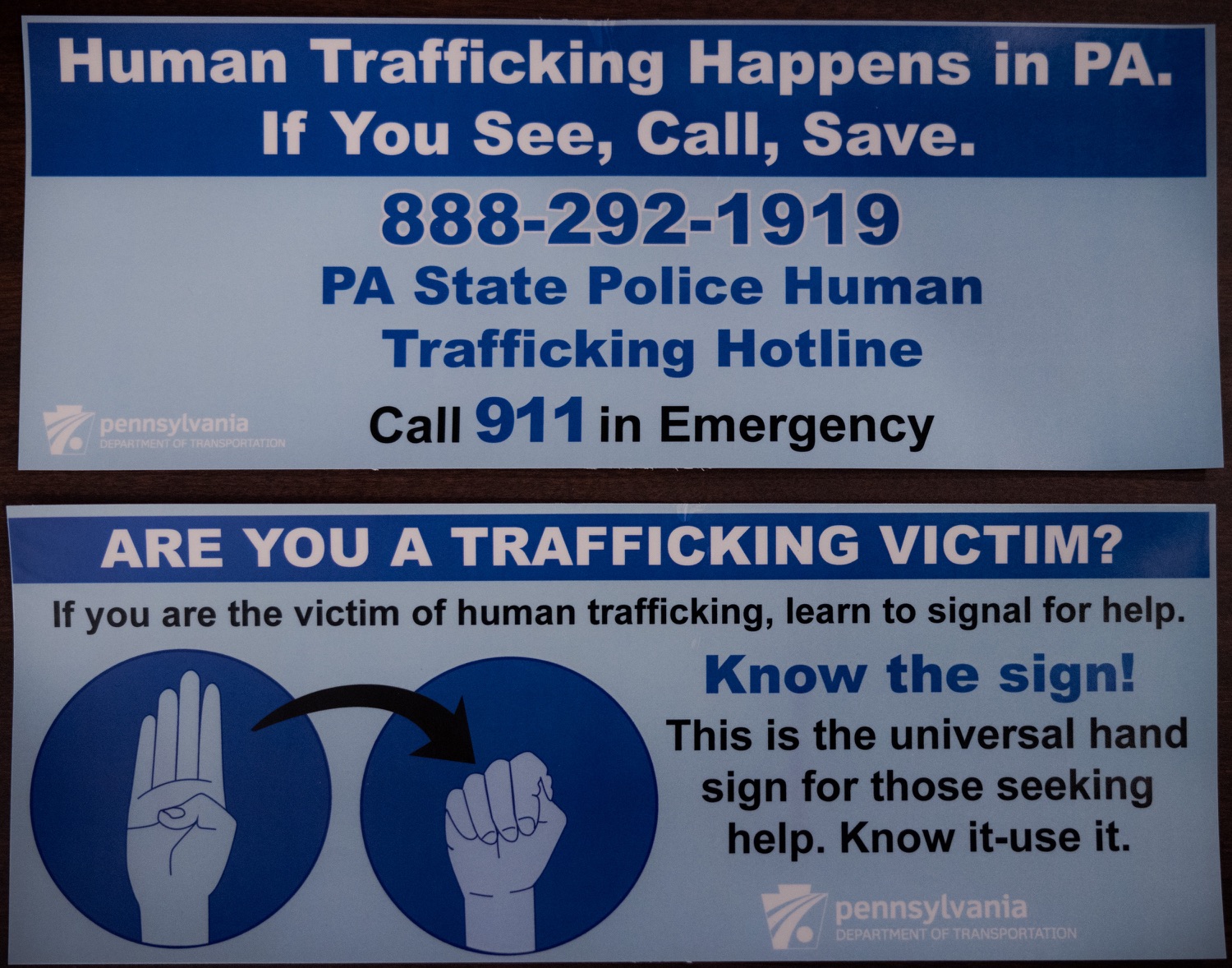 Executives from the Pennsylvania departments of Transportation (PennDOT) Health (DOH), Labor and Industry (L&I), and Pennsylvania State Police (PSP), and the Office of Victim Advocate were joined by other advocates today to discuss human trafficking, outline efforts to combat it, explain how to report potential cases, and offer resources for survivors.

Human trafficking is the exploitation of people using force, fraud, or coercion for the purposes of commercial sex, forced labor, or domestic servitude. According to the International Labour Organization, there are approximately 28 million victims of human trafficking globally with 17.3 million people experiencing forced labor in private sector industries and 6.3 million experiencing forced commercial sexual exploitation. January is recognized as Human Trafficking Awareness Month, with January 11 marking #WearBlueDayPA to raise awareness of trafficking.

“Human trafficking is happening across the world, and unfortunately, right here in Pennsylvania,” PennDOT Secretary Yassmin Gramian said. “We’re collaborating at state, national, and local levels to combat this problem and urge the public to join us in the fight.”

PennDOT is one of the first state government agencies nationwide to educate its employees on human trafficking awareness, with all staff at driver’s license centers and Welcome Centers receiving training. The training was also made available to other department employees, transit agency employees, and is available online under the “Human Trafficking” Media Center at www.penndot.pa.gov.

The National Human Trafficking hotline (1-888-373-7888) is a 24/7 resource for victims and service providers that also collects data about human trafficking for every state and the District of Columbia. Since 2007, the hotline has over 7,760 calls and online, text, and email reports in Pennsylvania. In that same time, nearly 1,900 cases of human trafficking involving more than 4,000 victims were identified. The hotline website provides additional Pennsylvania data such as a yearly breakdown of contacts, case types, and case demographics.

Members of the PSP Organized Crime Task Force participate in human trafficking investigations that lead to arrests and prosecutions with multiple federal, state, and local law enforcement agencies, including the Federal Bureau of Investigation (FBI), Homeland Security, Immigration and Customs Enforcement, and the PA Office of Attorney General.

“The Pennsylvania State Police conducts numerous law enforcement training in identifying trafficking cases across the state each year. We also provide civilian training at schools, hospitals and hotels because we cannot do this alone,” said Lieutenant Adam Reed, Director of the PSP Communications Office. “The public can help police in our mission to fight human trafficking in Pennsylvania by educating themselves on the warning signs and by calling authorities when things don’t seem right.”

The public is urged to report potential human trafficking situations to the national hotline, which coordinates with law enforcement and other professionals, at 1-888-373-7888, or the state tip line, 1-888-292-1919. Tips can also be sent via the See Something, Send Something phone application or by email to tips@pa.gov.

While it is challenging to identify a trafficking situation, potential warning signs could include:

The United States Trafficking Victims Protection Act of 2000 (TVPA) defines labor trafficking as the “recruitment, harboring, transportation, provision, or obtaining of a person for labor or services, through the use of force, fraud or coercion for the purpose of subjection to involuntary servitude, peonage, debt bondage or slavery.” The U.S. Department of State and the nonprofit National Human Trafficking Hotline summarize this definition of labor trafficking as a “form of modern-day slavery,” often involving debt bondage, forced labor, and involuntary child labor.

In Pennsylvania, L&I enforces laws and regulations that protect workers, including children, seasonal and farm workers, immigrant workers and factory workers. Its work ensures that workers do not fall prey to organized systems of forced, unpaid, underpaid or hazardous labor that are common in labor trafficking. L&I collaborates with law enforcement agencies when labor law violations overlap with labor-trafficking crimes.

“L&I is committed to working with our partner agencies and law-enforcement professionals to ensure that no child is forced to work or put in a hazardous working condition; that no worker is deprived of their protections under Pennsylvania and federal laws; and that no business is engaged in unlawful labor activities that could negatively affect Pennsylvania workers and other businesses,” L&I Secretary Jennifer Berrier said.

Concerned Pennsylvanians are urged to say something if they see something. If you suspect a trafficking situation, it is better to call the hotline and be wrong than to not call at all.

“Women make up a majority of reported survivors, but human trafficking isn’t just a women’s issue. Survivors of human trafficking come from all backgrounds, genders and identities,” said Executive Director of the PA Commission for Women Moriah Hathaway. “Human traffickers target underserved and marginalized communities, especially people who identify within the LGBTQ+ community, children and houseless individuals. Any person who is perceived as vulnerable is at great risk for exploitation, which is why this partnership is so important.”

“The buying and selling of people is just as wrong today as it was hundreds of years ago. Pennsylvania state agencies are grateful for the community partners doing work to combat and prevent human trafficking in our communities across the state. Together, we can stop trafficking in Pennsylvania,” said Commonwealth Victim Advocate Suzanne Estrella.

Resources for victims and survivors are available in Pennsylvania:

“The consequences of sex trafficking are similar to the consequences of other sexual violence,” said Acting Secretary of Health and Pennsylvania Physician General Dr. Denise Johnson. “Consequences can be immediate and long-term, including physical and relationship problems, psychological concerns, and negative chronic health outcomes. But sex trafficking is preventable, and we are fighting back in a variety of ways.”